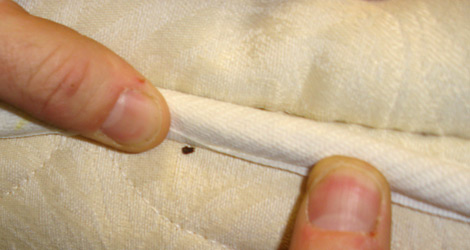 I have noted that numerous “authorities” such as Reader’s Digest, various government bed bug publications, and exterminator instruction sheets contain instructions to use double sided sticky tape as a monitor for bed bugs. In my own practice I have seen little benefit to this product.

I notice that some tenants place double sided sticky tape around their beds like a moat and I rarely find bugs in this tape. On the other hand, if we place sticky mouse glue boards under the bed legs of these tenants we can find, depending on the size of the infestation, hundreds of bugs on the glueboards!! The bugs appeared to walk right over the sticky tape and got caught in the bed leg traps.

So I decided to put double sided tape to the test in my bed bug experiment room. I purchased a roll of Canadian made “Cantech technical tape” double sided tape from my local hardware store. I put one piece on a some cardboard and another piece directly on the teflon pan  full of bed bugs and waited for the results. The tape on the cardboard usually repelled the adult bugs but sometimes they would simply walk across the tape like a “goose stepping Nazi” bed bug. Their feet would sometimes stick momentarily and then keep moving. The double sided tape posed little challenge for escape. The first instars would periodically get stuck on the tape, perhaps for a day, but would then escape. Over a period of several days not a single bug was permanently caught on the tape with a cardboard substrate.

The tape on the teflon pan substrate was very different. The adult bugs would walk around on the tape easily but when the bug attempted to get off the tape they had difficulty obtaining traction on the teflon pan, would flail violently for minute or two, and then escape. The first instars (baby bugs) would behave similarly to the cardboard/tape experiment and wander around the on the tape mostly unhindered. The big difference was that they could not muster the energy to get off the tape when they attempted to get traction on teflon pan. The end result was that I permanently caught all my first instars on that piece of tape.

So What do we learn? My practical field experience suggested that double sided tape was an ineffective  bed bug monitor and lab experiments confirmed those results. The only time that the double sided tape seemed to work was when it was placed on a teflon pan substrate – and then only for first instars. Given that double sided sticky tape is usually placed on rough surfaces in field use I suggest that it is useless in catching bedbugs.

I have noted one occassion where bed bugs were caught in double sided sticky tape.  The tenant had placed the tape all around her bathroom edges and I found a surprising number of bugs caught.  Given that bed bugs are rarely found in large numbers in the bathroom I suspect a neighbouring suite sprayed RAID and pushed large numbers of bugs through the plumbing chases.  The bugs, because they had pyrethroid poisoning, were very uncoordinated and were unable to goose step their way to freedom like healthy bugs.  But these bugs would have died anyways.  The healthy ones would have escaped.

One of the consequences of repelling bed bugs from bed legs

Inappropriate use of “RAID” in multi family settings – what are the consequences?