One of the consequences of repelling bed bugs from bed legs

Before climb up interceptors were invented I attempted to make my own climb up interceptors. I simply glued a small bowl and a large bowl together to form what in essence appeared to be an interceptor. I filled the outside ring with mineral oil and placed the contraptions under bed legs. It was my hope that the bugs would simply fall into the mineral oil and drown while the bed leg remained dry. It was a nice theory.

I found that I never caught bed bugs with these devices despite the fact that bed bugs were present in the suite. In one case a tenant turned on the light in the middle of the night and found the dresser right beside the bed was swarming with bed bugs. Upon inspection the dresser had no evidence of harbourage. As such I theorize that the bugs were repelled from the mineral oil moats and attempted to get as close to the carbon dioxide source as possible which was the dresser top.

I did succeed in getting rid of the bugs in that suite but only because I applied a residual insecticide in the suite. I made sure to treat the  dresser very thoroughly so that the bugs would be constantly wandering on treated surfaces attempting to access a blood meal.

In another case a tenant came to me with a complaint that her visitor had bed bugs on her jacket. I investigated and confirmed the existence of the bed bug. I took the opportunity to preemptively isolate the bed with the home made mineral oil moat and treated the entire suite with residual chemicals. In the end only one additional dead bed bug was found during the second round of chemical treatments – it was in a dresser drawer beside the bed. Interesting! I was beginning to sense a pattern here. And it was back to the drawing board for me as the thought of repelling the bugs really bothered me.

Glue board monitors – do they work? 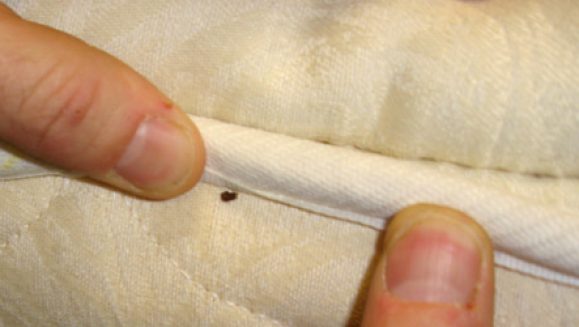